Gods, this was a long break!

Couple of months ago, I was thinking how should handle my site and what (&how) should I be posting. I was considering couple different approaches – finally I decided to publish only finished models and skip on posting anything aside of miniatures.

Honestly this hasn’t worked out well – even though I spent a lot of time on my current model, it took roughly 5 months to finish it. And truly, seeing a lot of people visiting (for which I am eternally grateful!) my site after each update I post on facebook, probably looking for more detailed information – I think it is not a good approach.

Hence, I will get back to the previous method, describing my progress and providing more insight on what I am currently working at. Perhaps a bit about the games I play. Or where I am travelling – I know those things are little interest to people, but those are also a big part of my life, which I would like to share.

Anyway, let’s get to business! (the paint mixes are at the bottom) 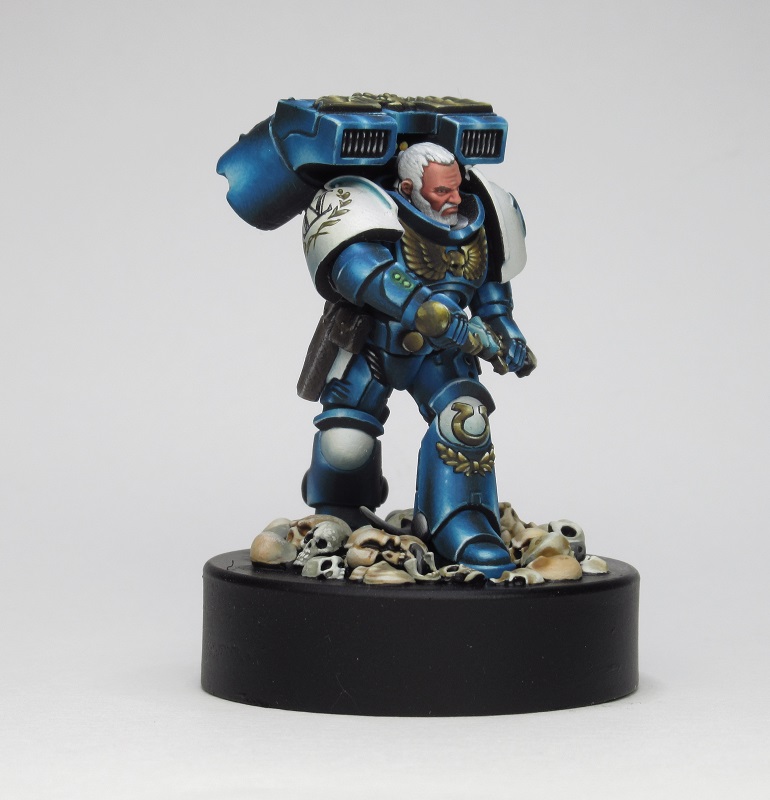 As you can see, the mini is finished. It took too much time, yet I am really happy how it turned out, tho the last parts – the jetpack and the base prolonged the project by at least a month…

The kit bash is based on the Lieutenant Calsius, with a head swap from the Custodes General (Trajann)and pauldrons from the Ultramarines upgrade sprue. The jump pack comes from the Deatwatch set.
The base was scratch build, I used the skulls from the GW skull set. Nothing fancy, but I think the whole thing works together pretty well.

Most of the parts of the model were painted separately, as otherwise I wouldn’t have access to all area. I started with head / legs + upper body, then pauldrons (twice, as I changed my mind about the freehands), arm without sword / arm with a sword / backpack and base.

The photo’s below, were slightly edited, I decreased exposition, increased contrast, whites and vibration. Due to this the photos seem a bit darker, but  the colours are as close to the real thing as possible, as my camera is not providing good enough results as I would like to. 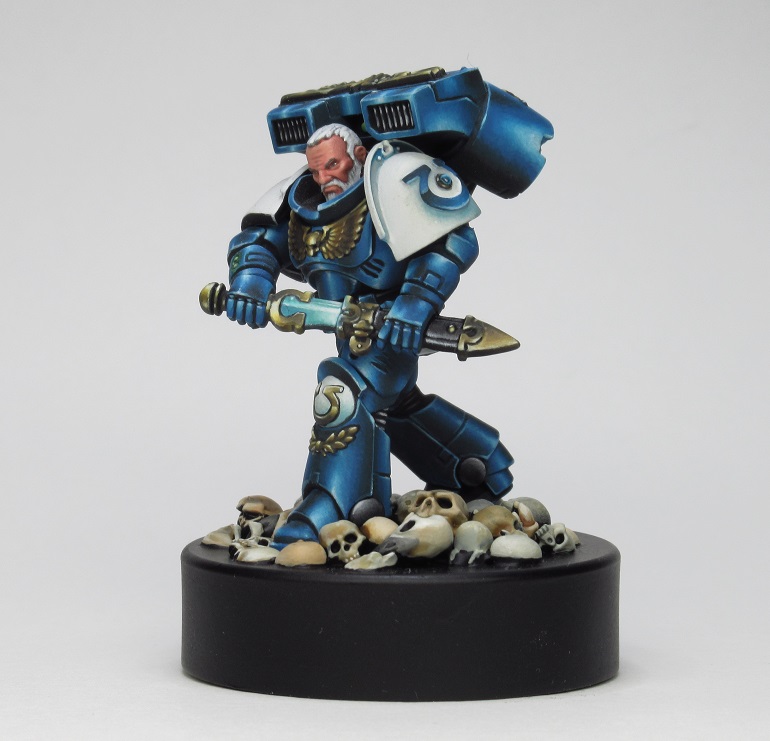 I put a lot of consideration into the color scheme (going through Ultramarines chapter history and lurking around pinterest and google images) – Firstly I wanted to go with the traditional look, but finally I did some minor changes to the main outline.

Secondly, I wanted this model to shine! The general idea, was this will have a highly reflective armor and will be looking shiny and pure. The main inspiration I took was from works of Gareth Nicholas and Andy Wardle (on whose work I based the gold elements).

I wanted to use a lot of white elements in the model and incorporate Roman Legionary heraldry (it seems very fitting for Ultramarines) – which was visible in the first iterations of the model. Tho, the final scheme is much simpler, as I like it more.

Funny thing, when I started this project my plan was to put in him in a hive mansion, but when I decided to add the jetpack the whole concept fell apart (how the hell he would move through the doors and even why he took a jetpack to the mansion?). 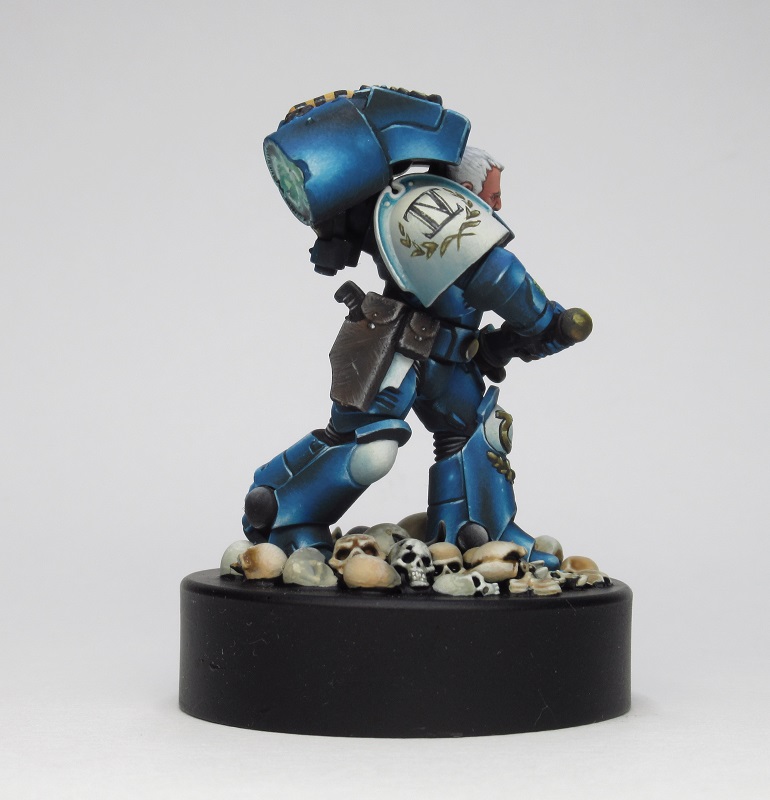 Anyway, the closest company that had a lot of white in their colors was the Third – which is best known for its actions during various Tyranid wars and involvement in Deatwatch Chapter. But, after painting the first pauldron and not liking how the “III” looks on it, I though, meh, IV company (this one is focused on protecting the Ultramar sector) will be fine too! Also, going with the third I would need to include some tyrranid bits here and there and I didn’t want to copy the idea I used during my IF Marine. Furthermore, I wasn’t really sure if the overall colour composition would look good with this concept.

As for the heraldry – the first freehand I did was based on how the shield were painted in various Legions, but the overall look wasn’t fitting. Sadly, I deleted the photo of it, so I can’t show you this one.

The overall tone of the model is pretty cold and not very saturated, as I, again, I wanted to do something different than the Imperial Fist marine. 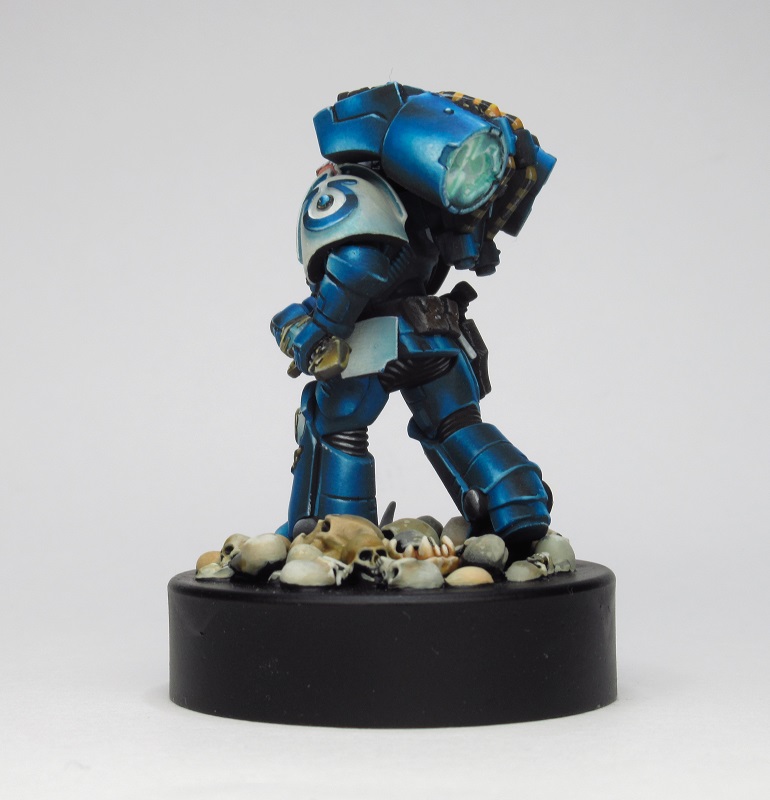 The model, got a Black undercoat. On top of it, I airbrushed a layer of Mediterranean Blue from Scale 75.

Blade and the exhausts of the jet pack

Almost each skull was painted differently, using this paints: 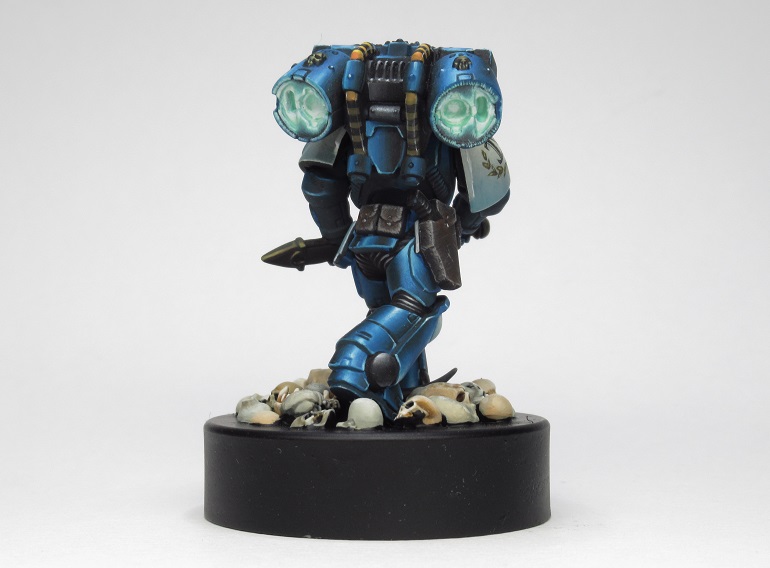 Thanks for the read!

It is done! (Trajann Valoris final)