This took much more time than I anticipated.

Much, much more. But, first and fore mostly – I enjoyed painting this model a lot – this model just kept on giving – the sculpt is simply brilliant!

Secondly, this was also a lot of first time’s for me:

I really enjoyed the sculpt – GW made great progression from the old, bit clunky, marines to the new primaris. Also, from my perspective – the most challenging part was the boler – and although I repainted it twice, it is still not something I am proud off. I need to learn more about NMM and how the lights should be placed.

Be aware this post will be pretty lengthy, as I want to go through the whole process and provide recipes for every part. 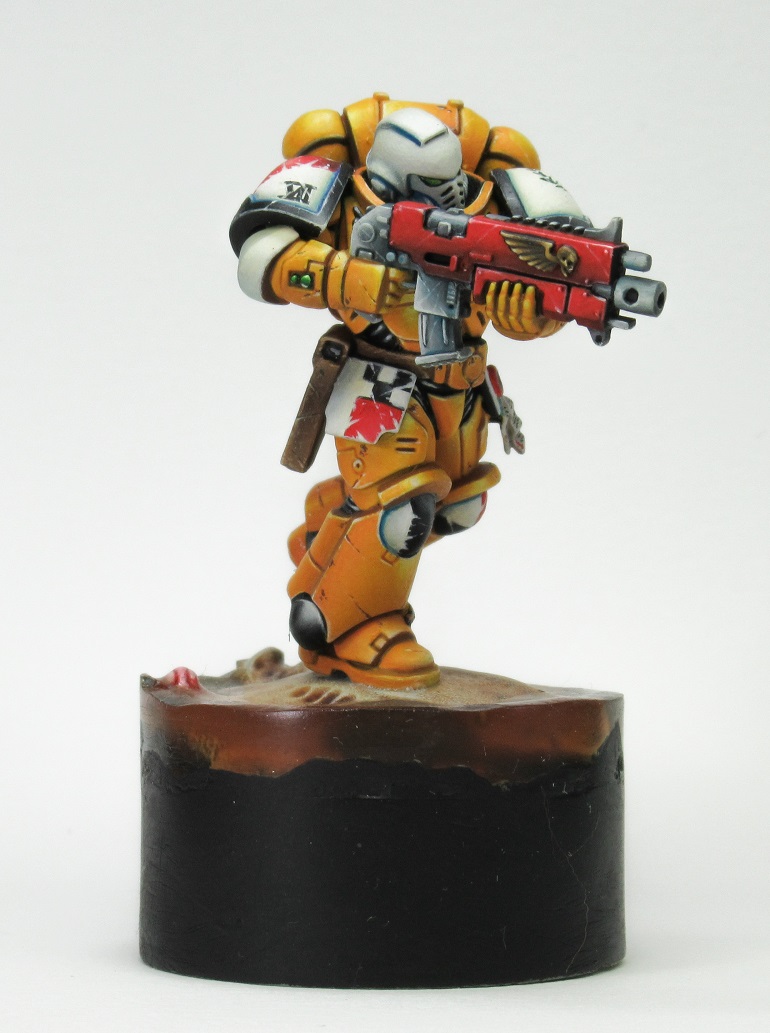 Each armour element was painted with a mix of: Mars Orange and Sol Yellow  (1:7) both by Scale75. Those are very nice for this purpose as Scale75 paints have excellent coverage and are much easier to create a smooth base. Shades were done adding to the mix more: Mars Orange and Hairy Brown by Coat d’arms.
For highlights I used Transparent Yellow by Warcolours and added more and more Linen White by Reaper Miniatures (Sol Yellow can be used as a substitute).

Last step – was to give the whole thing this nice golden look.

It is actually pretty simple, but you will need one particular paint: Sun Yellow by Coat d’arms (the producer of Golden Yellow from GW in the past). The paint has this very thin consistency, but a lot of pigment (and that awesome golden colour) – I added a bit Mars Orange and simply painted it all over the element I worked on before, on both the shades and highlights.

The  base was Pale Grey by Valleyo and Linen White by Reaper Miniatures (1:6). Shades were done by adding more Pale Grey to the mix as well as Blue 2 from Warcolours. In one of the WIP stages I used Tesla Blue by Scale 75, buuuut it didn’t work to well and I had to repaint those area’s.

As for Highlights: added more Linen White to the Mix, up to pure Linen White. Then glazed with White (used Warcolours, but ANY white would do).

Shaded parts got a glaze or two, with Yellowed Bone by Reaper Miniatures

Used Black by Valleyo and added White by Warcoulrs. No additional glazes, simple wet blending here. Nothing fancy, but needs some practice to execute properly. 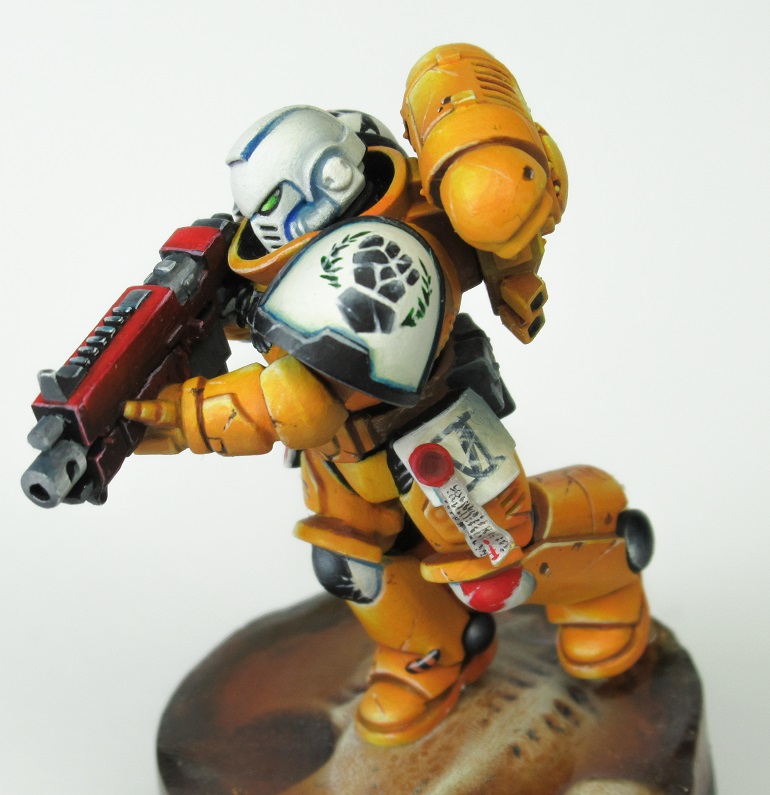 After highlights and shades, everything got a glaze of Blood Red by Coat d’Arms – the goal of this was to give the red parts a warmer look (similar to the yellow parts of the armour). Glazing with a mix of Yellow + Red would achieve the same result.

The darker parts were glazed with Antares Red + Black – I did this, as Blood Red is pretty gloss. Antares Red on the other hand is matt as hell : P

Linning was done, with a pink paint (Transparent Red by Warcolours, but simply add white to Antares Red for the same result) 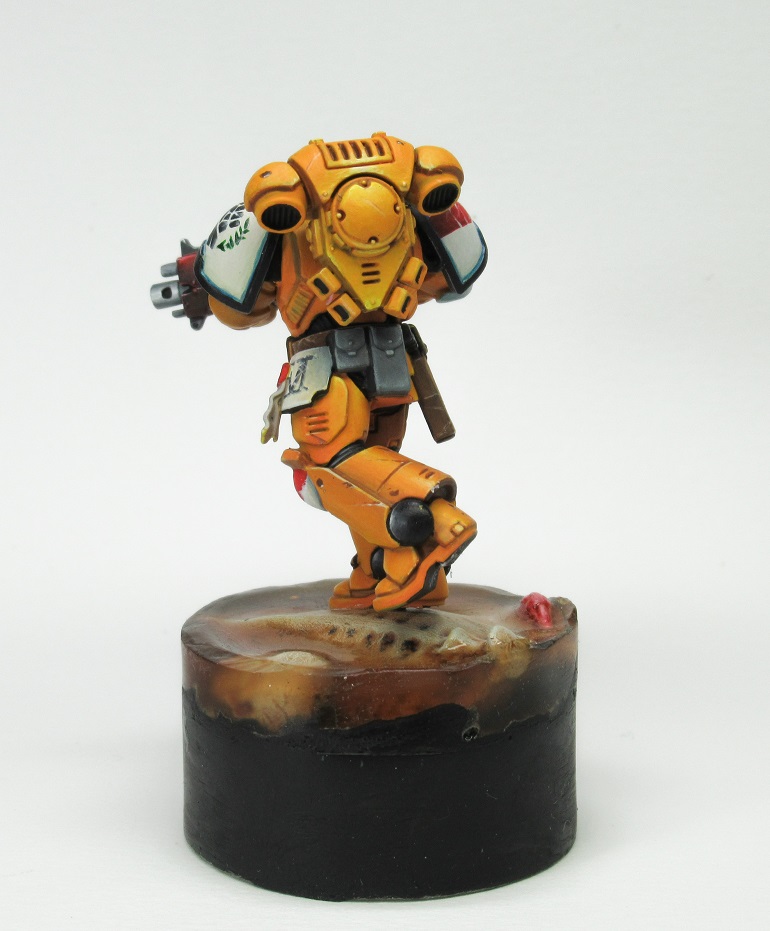 Bone in the base

The bone was painted, very similar to what I have been using on the Chieftain. It is pretty straight forward, I painted the whole thing Yellowed Bone, by Reaper Mini’s (GW Bone Yellow will work even better) and gave a hefty wash with Seraphim Sepia (by GW).

Then a bit of very delicate drybrush with Linen White, by Reaper Mini’s.

It was finished by adding small dots of Seraphim Sepia.

The water was done by using a two part resin, with added Brown Wash (I think I used Serpahim Sepia again…) 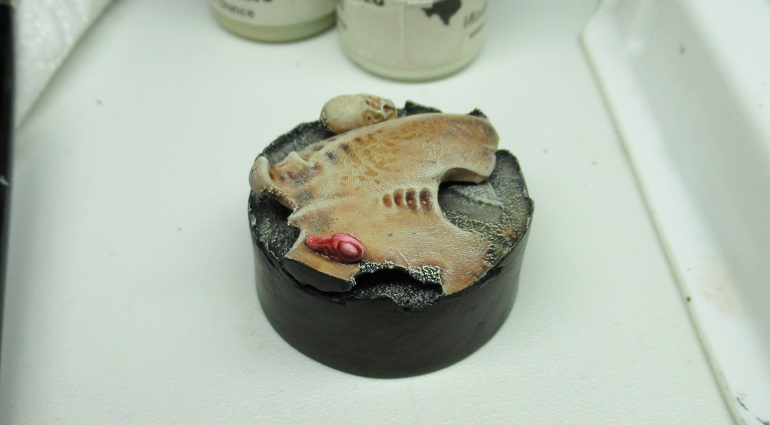 As I am bit tired with painting Space Marines, the next model I will focus on is Gideon Ravenor by Artel “W” Miniatures, as this is probably the best Inquisitor miniature I ever seen.

Other than that – I will receive a copy of Kingdom Death late January. I plan to do very quick paint-job with the starting survivors as well as the lion. If everything goes well there will be a tutorial about it.

Lastly, recently I bought some oil paints – want to check those things. I have an idea about using them to get realistic TMM Gold.