A small update on Gideon.

I have been working on the Ravenor miniature a bit less now. My set of Kingdom Death just came and I wanted to play a bit with it. The other factor was I did have some problems with the miniature itself.

The thing is – the model is extremely detailed, one of the best sculpts I ever seen, BUT it is also much smaller than what I am accustomed to work with.

Hence, getting the effect I want to achieve is much more difficult. For example, I repainted the head three times, as I wasn’t satisfied with the results. The effect is pretty neat – but it took a surprising amount of time to achieve it.

Secondly, I am not sure about the colour choices I did. They seem not to work out as I planned. I wanted to use true metallics, which turned out bad and I had to repaint the elements with NMM. Which is much more difficult (and doesn’t look too good) due to the size of the miniature.

And I am still not sure, if I will not switch to TMM again…

Another example is the cloak – I like how it looks, but honestly it doesn’t work well with the other elements I painted. The colour seems to be de-saturated. I will try to fix this with a glaze of a stronger blue paint.

Lastly – I have been waiting for the last couple of months for the Custodes Commander miniature. I will probably grab the box at the weekend. Hence, there could be delay in me finishing Ravenor.

Anyway! A bit more about the the model!

About a year ago, I spoke with Mr. Gareth Nicholas about his approach to painting faces – and specific colours he uses. At that point he recommend me a number of paints produced by Reaper Miniatures, that he uses often for his work and a tutorial he really liked (clicky!).

Never painted much with them – so it was pretty new to me and I usually paint more tanned skin – but I really like the effect here.

Moreover, I also included some painting approach I got from Ben Kommets patreon page (clicky), the one with colour distribution on faces.

So, the paints are used (all by Reaper miniatures): 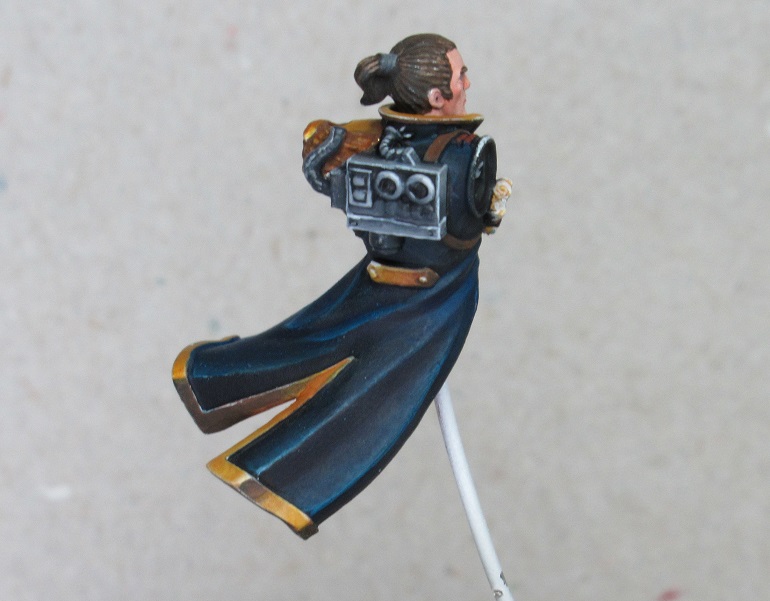 Quite simple approach here – Base was Caspian Blue + Black.

After I wrote this, I actually did that. Didn’t help.

To be honest the effect is far from what I wanted to achieve.

But perhaps, some of you will find the mix usefull:

Base is Dubai Brown, Highlights were done with addition of Yellow from Coat D’Arms and Linen White. Shade were done by adding glazes of Chestnut Brown.

At this point I will probably repaint the model.

Only the face will be left from the incoming cleaning : P